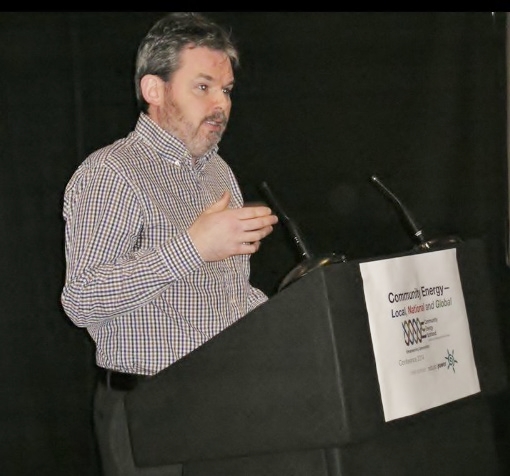 The focus of this year’s Conference, held in Edinburgh, was on retaining and adding local value through community ownership of energy. The organisers of the event Community Energy Scotland brought together all the strands of the community energy and local energy economy agenda, from finance to regulation, from planning to technologies and from funding to academia allowing attendees a comprehensive opportunity to network, learn and exchange ideas. The international element of the conference was also built upon, with a number of the 25 speakers coming from outside the UK.

During his speech to Conference, Mr McCusker raised the point that the concept of community energy has received far greater attention in Scotland. “When looking at the distribution of community energy groups, Northern Ireland is very much underrepresented. This is in spite of Northern Ireland’s track record when it comes to community organisation e.g. the credit union movement, the thriving community/voluntary sector, social enterprises etc. There is a very obvious lack of engagement from policy makers and citizens when it comes to taking more control of energy, saving money on bills, tackling fuel poverty etc.”

Addressing delegates Mr McCusker added “Advocating for community energy we need to strengthen community engagement with government and industries, including the role of the planning system. Our government needs a coherent vision, one which puts communities at the heart of any energy policy.”